Just before February ended, the Bajan Reporter was suggesting some of your required reading may need to include Tim Smith – author of a series on a former secret agent whose girlfriend is from Barbados!

So, we decided to see if the gent had passed the way of this Gem of The Caribbean Sea, and used his “Contact Me” part of his website? Lo, and Behold! This is what he had to say… 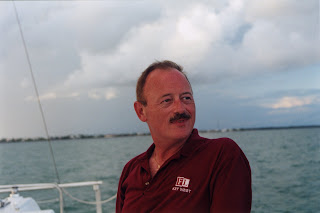 “Ian, I’ve never been to Barbados (it’s still on my wish list, though), but the Felicia character was inspired from someone who is from Barbados that I dated when writing my first novel, “Memories Die Last.” I came to the point of creating the “gal pal” for this hard-ass former CIA spook named Nick Seven, and had only to look across the table for my inspiration. The real ‘Felicia‘ gave me an enormous amount of cultural background, which I tried to incorporate into the character. I really brought her into her own, though, in my second thriller, “Never Trust Your Dreams.”

Thanks for the plug on my new book! I enjoyed your feature so much I’m forwarding it to everyone I know.

As if that was not enough? A fan of his series also added their comments to the page –

“This book definitely begs to be read, especially if you like fast-paced action laced with laugh-out-loud humor, quirky characters, exotic locales and sex that’s steamier than Key West in the middle of July.

A fan of Tim Smith.”

No wonder this blog’s ranking on Technorati has jumped from 559-thousand to 501-thousand in such a rapid pace! Many thanks for all overseas readers…