Director of Death Wish gets a different wish to keep his limbs: Barbados Vacation was seafood?s fault

Remember when Michael Winner was vowing he’d rather die than lose his leg? He was blaming the hospital and everything else but the actual condition, well, three well-known online gossip rags have his disclosure minus his apology – This is what Tittle-Tattle had to say….

“[The Director of Death Wish] narrowly escaped death after beating a rare disease he caught from eating an oyster.

Female First in the UK also carried the release –

“The bug commonly kills people within 32 hours of infection, but the 72-year-old cheated death by jetting back to a private clinic in London and undergoing a gruelling 10 week series of eleven operations that cost him a staggering $1.45 million.” 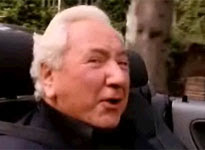 Believe it or not, there is a website which is called Jewtastic and this too had the same info on Winner‘s oh-so-memorable vacation in Barbados –

“?I started shaking uncontrollably. It was obvious to everyone but me I was very ill,? [Winner] says. ?I lost control of my bodily functions. When this illness gets you, every organ in your body collapses. You?ve got to bring every single organ back to life again.?”

So if it was an oyster, not wrong anti-biotics nor the hospital food here, don’t you owe Barbados an apology, Mr “Woe-Is-Me” Winner?