As this News Blog gets more popular, the tipsters increase – this one is backed up with photographic evidence…

“Imagine this, on the 27th Feb, 2007 at 12:44 pm this picture was taken in Barbados, as the photographer approached the airport from St. Philip….

“She managed to flag down the police, who then escorted her over to a security guard nearby the property who informed them that it was a regular occurrence.

“In this day and age ? the attitude from the police, the security guard and the obvious company (which shall not be named here, but can be identified form the picture) [not bothered by what] goes on in this country. 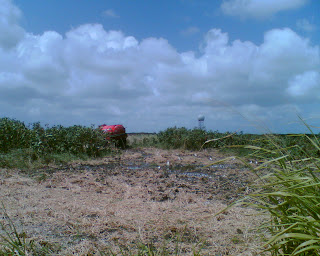 “So you are not bothered ? ok, but the next time you drink water from the pipe think of this picture and think hard ? that is a sewage truck and its contaminating our ?pure and clean? water system.

“We wonder why our children are so sickly and more people are suffering from illnesses that developed countries have conquered a long time ago.

“One wonders how long has this ?regular occurrence? actually been going on. I understand that the Ministry of the Environment has been provided with the information, so too has the press and for sure I know we are heading into an election season.

“What happens now. I am sure that all concerned are busy {with} the coming campaign, lets hope they can focus their attention on the ?less important? things in this society ? us the people that put them there in the first place.“

The information has also been fwd-ed by Bajan Reporter to all relevant authorities like the DPP & Police.