When last you may have heard about Earthrace – the biodiesel powerboat from New Zealand – is that they were looking at doing it over next year, after the Guatemalan tragedy with the illegal fishing crew… There are now some new developments –

The captain of the New Zealand biofuelled vessel, Earthrace, has reached a settlement with the family of a fisherman killed when Earthrace collided with a fishing boat off the Guatemalan coast last week. 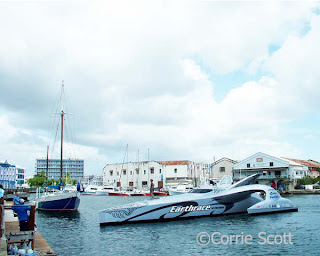 Peter Bethune details the settlement on his blogsite which is keeping a record of Earthrace’s bid to beat the world record for circumnavigating the globe in a bio-fuelled vessel.

Now, it seems they may get going again tomorrow, I had emailed the crew and spoke with some of the interests involved – Pete the skipper was glad to hear how some folk along with yours truly on this News-Blog were encouraging them not to surrender; my land-lubber source was observing what you can read for yourself in the Ground Crew’s Blog (BTW: There’s a vacancy right now, no pay but expanses covered)- these accidents happen all of the time out there, it’s just that Earthrace was one of the few folk noble enough to stop and help! This is the leg so far from Scott‘s perspective –

By all accounts the Earthrace crew is free. All that is except Captain Pete. Pete is almost free. The family has agreed to a settlement with the insurance company. The money transfers are in the ether of international banking and we are now just waiting for the final judge’s stamp. We are told this will take place directly after the weekend on Monday morning. By Monday afternoon we should be free to leave Guatemala for ports north. 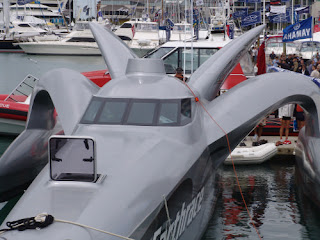 My other source was also concerned for the crew to continue the journey now based on the weather systems brewing off of the African coast, but according to Scott Fratcher – they may look at either USA or Mexico to re-route… I am still glad Barbados was a part of it, and I hope they see the journey through whenever and however – it will be a boon to all mankind if one day we do not have to depend on digging in the ground for dinosaur juice and instead rely on re-processed corn fluids, which is much healthier in the long run! Remember, the original diesel engines were designed to run off of peanut oil not even corn oil!

I even asked if there were any vested interests who did not want the crew to succeed (the propeller, bad fuel, etc.) but Pete said it was just bad luck so far, and my land-lubber source agreed. For all of the hassles that Pete has suffered he has been remarkably laidback about it –

Our insurance will pay a sum of money to assist the family of the lost fisherman, the medical bills of the injured fisherman, and also to purchase a new fishing boat, hopefully complete with white light. It?s actually not a huge amount of money, although by Guatemalan standards I suspect it is. I have mixed feelings about insurance paying out. On the one hand I see it as an admission of guilt, which Fernando assures me it isn?t. But on the other, it does allow these families to move on from what has been a devastating tragedy.

All I want to know from hereon in is that they make sure no bananas get anywhere near the vessel!