You remember back in January when Barbados was host to a World-Class Magician who guested at the Limelight Cafe? There were some guys in the audience who were students from a Marine training vessel, and I recall how I thought they pretty pickled. Hah! It seems two of the guys (not the ones who went to Limelight, they were smarter) got friskier than they should have, and made off with a very expensive toy –

“…Two Massachusetts Maritime Academy cadets pleaded guilty to stealing a $1,000 teddy in Barbados and have now been expelled from the academy for the crime.

Thomas Stralka, 21, of North Kingstown, Rhode Island, and Ron Varrichione, 24, of Medway were kicked out of the school earlier this week.

Stralka says he will reapply to the academy to show how sorry he is.” 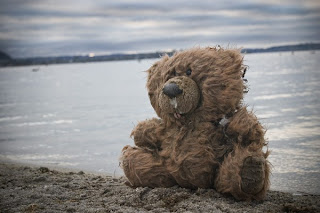 That’s what WHDH-TV in Massachusetts had to say, but as you see, one of the pair is from Rhode Island, so this is what Eyewitness News from WPRI/Fox-TV says….

“The two cadets were arrested in Barbados in late January while their training ship was docked in the island nation.

They say they wandered onto an estate after a day of drinking on the beach and nabbed the pricey stuffed animal.“

They should have just resisted the urge and grin and BEAR it!