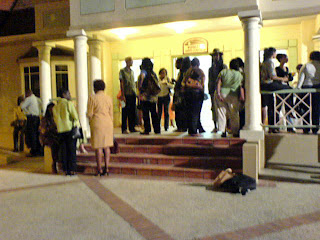 In April last year, a mutual friend of my mother‘s and myself hosted a Book Launch at Pelican Gallery in the City… This was “Tree Of Youth” and the author/friend is Robert Edison Sandiford.

Now his Tree Of Youth collection gets a nice thumbs-up from Canadian reviewer George Elliott Clarke – “Sandiford?s second collection of ? lucky 13 ? short stories, The Tree of Youth (DC Books), is a stellar advance over the first collection, Winter Spring, Summer, Fall (1996), which struck me as too quiet a quartet; perhaps a tad too interior-directed and reflective, although written gracefully. 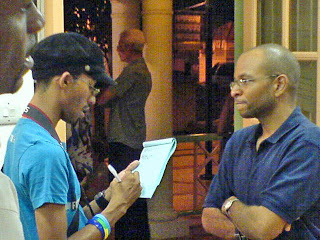 Robert and myself became good friends in our passion for comics and science fiction, this aspect seems to hold GE Clarke’s attention in this anthology as well – “It is fascinating to witness Sandiford?s engagement with other African-Canadian writers. His story, The Tree of Youth, featuring an elderly lady who is able to turn herself young and sexy thanks to special herbs, owes a debt to “magic” tales by Andre Alexis and, maybe, Althea Prince. The Many Faiths of Sir Wilfred Knight reads like a Gothic rewrite of Austin Clarke?s An Easter Carol.

“Given his Bajan and Canadian experiences, Sandiford?s settings swing between both countries. In Reckoning, two white tourists fear a black Bajan man wants to rob them, when, in actuality, he is trying to save them from being mugged by two young toughs, who, after the white couple flee, pummel the man to within an inch of his life…

“Perhaps the most compelling stories relate to lust, adulterous, or heterosexual dysfunction of one sort or another. A Woman Called Happi tells of a Bajan lady who blithely enters into an adulterous liaison, one that endangers her lover?s career, but also ends it, just as happily, without a hint of concern for her now ex-lover?s predicament. 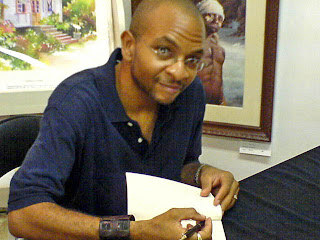 “They got to talking that morning, which is how most affairs really begin even when they end somewhere else entirely,” Sandiford writes wisely. But, at the end, Happi tells Johnson, her lover, that her man “wants to hurt you. Bad. I?m sorry,“ She beamed up at him, like a shaft of light from hell.

“Sandiford?s prose is dexterous and insightful. It cuts close to the plain style of his exemplars, Conrad and Naipaul.“

The book is available here in Barbados, too – hint, hint, hint!