(NSFW?) Did he or didn’t he? Look what Oba’s getting! No wonder the born-again thing went thru de Eddoes…

CBC-News actually initiated a story that for days on the Internet had everyone pondering its veracity – that Marion Jones from the USA would soon become Mrs. Obadele Thompson; in fact when I saw the item, I went on Obadele‘s website and used the Contact Us section to send a quick note to his father, who’s also his Manager, to query the truth of CBC‘s item – but no cigar!

In and of itself, the story is rather juicy, and CBC put aside much of the gravy that was actually more interesting than the meal… Okay, so the two of them are expecting a child later this year – what happened to Oba’s strong born-again Christian beliefs? Does that not exclude pre-marital sex? I mean, for myself, if you look at Song Of Solomon in the Bible, it talks about sex, but not if you’re married or not – just go ahead! 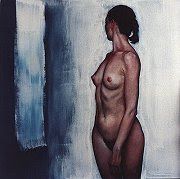 But then, Marion came here last year to recuperate from all of her slings and arrows – she met the 2000 Olympic Bronze medalist again apart from other track-meets, perhaps Oba even got a look at the website called commissionaportrait where a nude photo study called Marion Jones with an athletic lady with her face turned away, hey Oba is fast but human, not superhuman – okay? Maybe he felt he abstained too damn long, as you know, some athletes “restrain” before a race – other folk “save“themselves for marriage; but Oba ‘mussee’ say enough is NUFF! LMAO

Who knows, who cares? In the end, it’s their decision… If it’s true!

Nevertheless – there are still question marks hanging over this alleged event, the Nation sought to verify it; Athletics Weekly wondered why only CBC had word of it; it seems only a Spanish website is ready to confirm the deed as done, but they clear themselves by crediting the Nation! 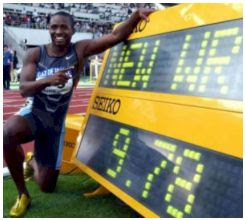 “American Marion Jones is expecting a child from Olympic medalist sprint athlete Obadele Thompson from Barbados, to whom she married this weekend.“

But there are few if any mentions of it in a day and age where almost anybody can Google their name and find at least two references pertaining to themselves… The Orlando Sun-Sentinel is another media house bold enough to declare the union as done, although they credit no sources for their info…

“Barbados‘ top sprinter over the past decade, Obadele Thompson, married American five-time Olympic medal-winner Marion Jones on Saturday. In a private ceremony in North Carolina attended by family members and close friends, the couple immediately set off for a vacation in Barbados. Thompson gained acclaim when he won the bronze medal in the 100 meters at the 2000 Sydney Olympics to become his country’s first Olympic medalist.“

The whole puzzle reminds of that repeated quiz over dancing from Lewis Carroll… I hope they do dance!