Literary Detective Character is from Barbados

You ever hear of Tim Smith? Me neither, but when I surfed cyberspace to see what Bajan things or events were happening this leapt at me –

“He’s as cool as a Pina Colada on a Key West beach, he’s the kind of guy your mother wouldn’t let you play with and he’s every bad guy’s worst nightmare. Nick Seven… “The Vendetta Factor” is a thrilling action/adventure that takes readers into a turf war between two Mafia families in which former CIA agent Nick Seven finds himself in the middle. 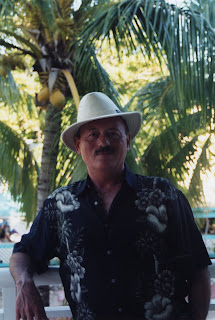 “When Nick’s friend, gambler Rock Moretti, calls him to help with some trouble on his casino cruise ship in Palm Beach, Nick’s peaceful life in the Florida Keys becomes a battle of wills that he must win. “The Vendetta Factor” shows readers how Nick realizes his own vendetta and quest for revenge when he becomes the target of a hired assassin. With Felicia, his Barbadian beauty, by his side, Nick knows there is more at stake than meets the eye.”

So, it requires for the book to be read to see how genuinely he has captured the Bajan spirit in this lady-friend of the ex-spook. This is what Tim Smith‘s personal website says about the gal-pal….

“My books are mystery/thrillers set in the Florida Keys, involving Nick Seven, a former CIA agent trying to get away from his past and live an idyllic life in paradise with Felicia, his dream lover from Barbados. In each story, though, Nick learns the hard way that just when he thought it was safe to look over his shoulder, something else from his past pops up to cause trouble. “