“Part of the problem here is in the performances, for despite [Tony] Thompson‘s formidable presence there is no depth to back it up, and while Sealy-Smith eventually loses some of her stiffness, it happens too late. The major flaw in her carefully considered pose is her failure to create an arc for her character that reconciles the Mary Mathilda we first meet with the character revealed when the action moves to a remote canefield on the plantation. 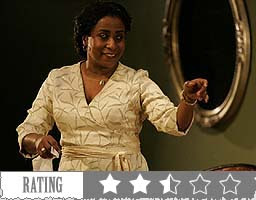 “By the time she arrives there, the character Sealy-Smith has built doesn’t mesh with the things Mary Mathilda has to do and says.

“The problems with The Polished Hoe are not purely in performance, however.

“In bringing Clarke’s tale to life, director Taylor fails to find a sufficiently theatrical way to superimpose past on present, rendering the flashback scenes with all the lurid awkwardness of a literary bodice ripper.”

Can you say “OUCH“? As if that was not enough, the Globe & Mail had their own contribution –

“As rich as this material is, the adaptation by Colin Taylor (in collaboration with Sealy-Smith) is dreadfully basic. Its problems go far beyond standard concerns about the subtractions and reductions a 462-page novel must endure to become an 85-minute piece of theatre. Taylor and Sealy-Smith have yet to find a concept, a theatrical conceit of some shape, through which Clarke’s story can be told onstage.

“There comes a point where naturalism just won’t cut it. The script is not so much Mary’s gripping story as a dull list of her ups and downs. The writing has a matter-of-fact quality to it that sounds more like a police report than a tale from Mary’s lips. There’s no poetry, tension or flexibility to it. 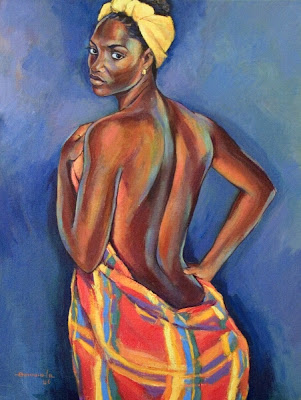 “And if the words sound stiff onstage, the direction (also by Taylor) is positively intractable. From poor blocking of the present-day scenes to clich?d staging of the past behind a white curtain, Taylor fails to give The Polished Hoe a memorable visual vocabulary. In fact, the production is so devoid of theatricality, I began to “see” it more as a radio play, particularly with Taylor’s predilection for sound effects, from incessant crickets to portentous brewing storms. And if there’s one saving grace to Thompson‘s leaden performance, it’s his warm, deep voice.”

All this does is make me want to read the book and see the play for myself, I mean, really, I have seen Tony perform – just even recalling memories of Barbadian at the CBC canteen here in the Pine, that man just is perpetual theatre; so I feel those Canucks may be full of… Anyhow, see ya at FCH!