Back in Mid-January, we told you that a Bajan was heading an inquiry over in Basseterre on an alleged sick-out by members of St Kitts’ police at the same time there were protracted wage talks on their behalf… Now, the Sun St Kitts says Charles Blades is soon to make known his deliberations on the matter – “?The report is being compiled. I haven?t spoken to {Blades} myself, but it?s my understanding that the hearings are finished and now he is compiling his report. When it will be ready, I cannot say,? [says] Attorney General Dennis Merchant“ 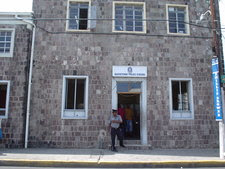 It’s the view of the Denzil Douglas regime that national security was put on the firing line …. “In the days leading up to the Federation?s 23rd anniversary of Independence in September 2006, an inordinate number of police officers reported sick, seemingly as a means of protesting against the government?s refusal to meet their demands of increased pay, better working conditions and a review of salaries and pension scheme.

According to the government, the incident affected the opening of the new law year, the Independence Day parade in both St. Kitts and in Nevis as well as the general effectiveness of the running of the police force.”