Ppl may think I am being very harsh on the Local Organising Committee (LOC) for the games to come, and the Grand Re-Opening today, but we have to remember that excellence has been the cry as the benchmark for making the matches a success! Well, that newspaper which has the same birthdate as moi, has been a bit less demanding on the level of completion in Fontabelle, in fact – you could say the Independent is not in a position to pelt big-rocks as they too have a transparent roof?

“To be at the sparkling, re-fashioned Kensington Oval yesterday was not to be surprised at how little has been achieved but how much. As was graciously pointed out, it perhaps ill becomes a reporter from England to start poking about asking impertinent questions about the completion of sporting arenas considering the fact that the new Wembley is now four years behind its initial reopening date.“

However, to be fair? I am not the only taskmaster expecting more – “The whole of the Caribbean is engaged in a race against time. This an obligatory sideshow which accompanies all major sporting occasions but it is rather complicated in the West Indies by the fact that the ninth World Cup is being played in nine different countries, many of which seized the moment to build or radically develop stadiums. 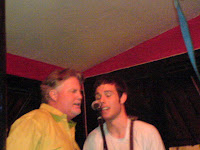 Concerns over the completion of at least three of them have been raised this week by the venue development director, Don Lockerbie. Additional worries continue to be expressed about ticket sales, accommodation and transport.”