(Follow-Up) Everyone has great time despite flaws, it was not all it’s cracked up to be for others in Kensington’s shadow… 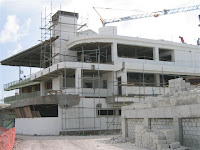 As the Mighty Sparrow used to blurt in one of his calypsoes – “WE LIKE IT SO” and so it went for the nearly complete Kensington Oval – this is essentially the view put forward by The Guardian, “The start of the World Cup is 22 days away and yesterday the renewed Kensington Oval in Bridgetown, Barbados, the venue for the World Cup final on 28 April, was officially reopened. Two teams, led by Sir Vivian Richards and Alec Stewart, appeared out of the new Sir Garfield Sobers Pavilion to play a celebratory Twenty20 match and more than 10,000 spectators tested the facilities.”

The International Herald Tribune has similar perspectives – “On hand was West Indies great Sir Garfield Sobers, whose statue was in the front of the stadium. He was given a standing ovation by the crowd of more than 12,000 as he was driven around the field in a golf cart.

The 125-year-old ground was demolished in 2005 and rebuilt to increase seating from 16,000 to 28,000 at a cost of US$67.5 million (?51.4 million). The ground features a new grandstand at the northern end, which is five floors high and the second tallest structure in Bridgetown.”

Even the Daily Nation had glowing accolades for the most part… “Easy parking, an efficient bus transportation system to and from Kensington Oval and co-operative passengers, set the tone for the day yesterday for thousands of cricketing fans.

The park and ride system used to ferry cricket fans to and from Kensington Oval to witness the grand reopening and the 20/20 match, has generally been given a passing grade by both supervisors, bus drivers and commuters.

Car park officials at designated park and ride sites reported that most people car-pooled for the day.”

However, the Nation also indicated those who lived closest seemed to have the most to endure – “…residents in surrounding districts were not in much of a celebratory mood.

A number of them said they have paid too heavy a price for progress.

Some said their homes had sustained varying degrees of structural damage as a result of construction at the Oval.

When a SUNDAY SUN team visited Pickwick Gap and New Orleans, St Michael, yesterday, residents were upset over cracks in the walls and foundations of their houses which they claimed were caused by vibrations from compacting and pile-driving machines used during the renovations.“