Follow-Up: Billfish Tournament ? One Bajan flounders while another has a good catch 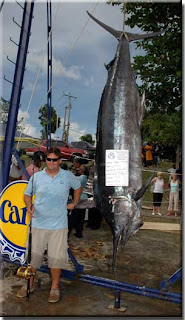 Remember when we spoke a of a Bajan who had a good chance at a Billfish Tournament? Well, Adrien Johnson did not fare so well, then again, some of the Barbados contingent did not have smooth sailing either…

“Wednesday, the 2nd day of fishing saw early trouble for Talking Blues (Trinidad) who had a prop throw a blade through the hull of their boat whilst running out ? quick improvisation managed to stem the flood and allow them to get safely back to the dock where they spent the day making repairs. More trouble awaited Storm Hunter (Barbados) who broke a prop shaft whilst far offshore ? they had a slow trip back on one engine to make repairs. Zu Zu (Grenada) was again on the fish but this time their luck was not quite so good as they lost 4 and released one. Why Worry (Trinidad) hooked a monster marlin, which they played for 5 hours before losing it almost within gaff range when the swivel broke. They were in awe of the size of this fish which jumped close to the boat at one point ? a definite tournament record breaker ? if only?. They have requested that the tournament allow the heavier 80lb class line next year?. Hook (Trinidad) had a marlin release and later landed a nice yellowfin but sportingly disqualified it, as they had to swap anglers on the rod due to exhaustion! This was the best day of the tournament with a total of 29 billfish being released.” 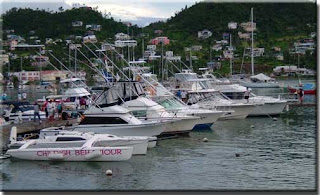 However, a Bajan who is my namesake, so to speak, offered a small redemption for the Bimshire side – “Ocean Spirit (Barbados) probably the smallest boat in the competition also boated a small marlin, which had become tail wrapped and died. This fish did not make minimum weight and they were penalised for this ? however this was soon forgotten when Ian Hutson boated a record-breaking yellowfin tuna of 173 lbs which earned them a cheque for EC$5000.”

Barbados held second place with Legacy in the boat category, but did not hold any other slots – except if you count the culinary side of it? “The Barbados anglers organised excellent dishes of seafood and fish chowder, which complemented the ?oil down? and roast pork provided by the tournament, as usual the bar was kept busy all day and some crew members had trouble leaving?.”