CWC 2007 – lacks so much buzz, that apiaries are welcome

The most damning piece of commentary on the current status of the CWC 2007, has to be from Felicia Persaud, usually I try to break down what is being said into bite-sized chunks, but her ingredients are too rich to be delivered in any other way than the original multi-course meal, while this editorial is regional in focus the scope is definitely Bajan as we too are a part of what will soon unfold, so here goes – “With some 30 plus days before the opening of Cricket World Cup 2007 in the West Indies, there?s no denying that in the US Commonwealth Diaspora, there is no buzz. No one is excited enough about this mega sporting event largely because the promotion has been lacking to nonexistent.

“Amazing isn?t it? The biggest sporting event ? practically the Olympics in the Caribbean ? and there?s no excitement in the US Commonwealth Diaspora. The just-concluded Air Jamaica Jazz fest generated more buzz in the Diaspora than World Cup Cricket has to date.

“There are no radio, television, web or print ads apart from a few put out by Direct TV and Air Jamaica. And the few promotions by tourist boards among local groups in the Caribbean Diaspora are lackluster and last minute, with no real money invested to target this market seriously or hire real ambassadors among cricket clubs, community groups and the media for a sustained campaign. 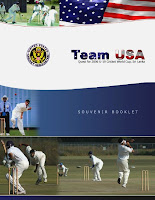 “Top Indian and Pakistani media are also not being utilized and neither are the many cricket clubs that dot the US landscape. Why is this happening? Well first off, most of the promotional dollars is largely being given to agencies that seem to have absolutely no knowledge of what cricket is about much less the target market for such a promotion.

“Of course this cricket promotion is not for the regular mainstream American tourist in Connecticut or Maine so they are at a mega loss. Because White Americans will not be going to the Caribbean for cricket but the Caribbean, Indian and Pakistani fans will be. Yet they are the ones who are not being targeted so why should they bother?

“With Caricom visa officials, stung by criticism over the last minute visa announcement for fans coming in from India, Australia and Pakistan among others countries, one would think that the obvious choice would be to boost promotion in the US Diaspora to target naturalized citizens from these regions and the Caribbean. Of course that has yet to materialize and the deafening silence continues. 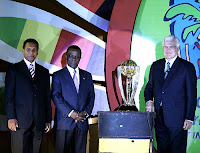 “This week, the Associated Press reported that officials of the ICC CWC 2007, Inc., the official body charged with presenting the festival, unleashed a series of regional ads, hoping that local Caribbean residents will help boost their lagging ticket sales.

“Ok! But are local Caribbean nationals going to also book rooms that are being cancelled at local hotels in the host venues, or pack the monstrosity of stadia that governments have spent million to develop just for this event? I don?t think so! But then that?s just my humble opinion. Maybe the so-called experts charged with making this event happen know something I don?t but from where I sit, the production to date has been one disjointed mess, where the key units are ignored along with the key markets.

“Tourism officials across the region and key players must have been left out when a set of government ministers decided they would put a visa system in place for a ?one Caribbean? space from February 1. And now with the clock ticking and the visa processing system now getting underway, hoteliers are starting to get those dreaded cancellation calls on rooms and not the over capacity crowd that was expected.

“As Josef Forstmayr, managing director of Round Hill Hotel and Villas in Montego Bay, Jamaica told the British Voice recently, ?This is the worst public-relations nightmare that the Caribbean has ever created for itself.”

“Still Chris Dehring, the chief executive of the ICC CWC 2007 remains positive, ?This event has faced so many challenges that at this stage, everything is full steam ahead, the little hiccups are simply rolled out,” the paper quoted him as saying this week.

“Perhaps so, but with just over a month to go before the unveiling one can only pray and hope that the event goes well. Not just for the organizers, but for us as Caribbean people. Since it is brand Caribbean that is on the line here and not just Cricket World Cup West Indies. It may be last minute to do a US Diaspora promotion now, but better late than never.”