The Ottawa Senators credit using the ‘Net as their success for their latest contest – “The Hockey Night in Barbados micro-website had 472,226 visits, while the Senators site had 1,185,26. Launched in November 2006, the Hockey Night in Barbados contest invited fans to submit short videos online, showcasing their team spirit. Semi-finalists were featured on the micro-site and during games at Scotiabank Place, where the fans could vote immediately for their favourite entry by SMS (short message service voting on a cell phone). The winner will be announced at the Senators home game on February 28 and crowned Sens Army Captain.“

Beth Evans made it through to the semi-finals and soon they will decide who is the Big Kahuna to make it over here at Bert’s for the big game. The team says the text messages not only boosted their popularity, it led to longer website visits – “During the 2006-07 season, visitors have spent an average of eight minutes per visit compared to two minutes last year.“ 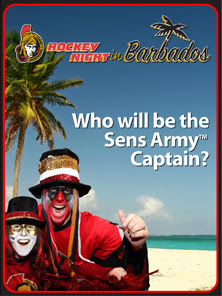 Successful marketing has led to the rising popularity of this blogsite as well, I think the hockey talk increased awareness overseas – In addition, by using Technorati, I started at a rank of approx. 780-thousand then in January, it jumped to 662-thousand at the start of February and now “Bajan Reporter” has reached to 559-thousand! There are other sites like addme.com or submitexpress.com or freewebsubmission.com which also assist in promoting your blogs but they require HTML-piggybacks, Barbados In Focus believes in similar piggy-back promotions like Global Voices Online.