If you live in St John or St Joseph and you take an early morning bath, you know you usually end up with no gonads for the chill-factor (experienced it myself, in early 90’s and never wanted to go through it again, either). Obviously, Solar Dynamics would make a lot of money in these areas (apart from its covering most of the Caribbean)and so would Sunpowr systems (they ship to Grenada) depending on who you prefer – but it is James Husbands‘ company who is now exporting successfully to Nigeria and may even look at Bermuda soon, too!

In their Royal Gazette, there is an article which resembles a political tract in its extreme homage to that particular leadership in the 70’s, but it is really examining the worth of solar heating – don’t forget, every now and again, Bermuda has some vicious cold snaps despite being the tail end of the Caribbean, so to speak! 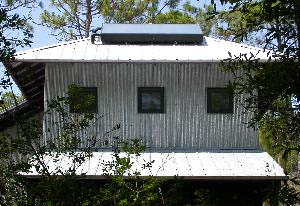 Anyhow, this is the Royal Gazette‘s evaluation of our solar heating industry – “According to the University of the West Indies, the initial set up cost is about $1500 for a solar system. A new electric water heater costs about $500.

“But after tracking similar usage of the two systems over a two period, both customers paid nearly the exact same amount ? because the renewable energy consumer is saving $520 per year.

“In Barbados solar water heating completely pays for itself in about 72 months.

“For the entire nation the bottom line savings are even more impressive. National solar use eliminates the importation of about 33,000 tonnes of fossil fuel, a $6.5m savings at the price of $25 per barrel.

“With almost 30 years of experience under its belt, Barbados is leaps and bounds ahead of Bermuda, and the United States for that matter, in the implementation and use of solar energy.“

As ol’ Jimmy Husbands could have said? “This article indicates a good BREAK-BREAK-BREAK! for Bajan solar water-heating!!“