For the last few days, I haven’t been able to move away from crime, this time it’s to do with an overseas survey… 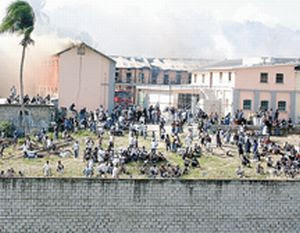 As for Barbados we unfortunately have made the Top Twenty – “The Caribbean dominates the top 20, with 12 nations plus Bermuda featuring.

“The US Virgin islands is fourth overall.

The BBC report did not say if this idea was being guided towards capital crimes, as that would be as ridiculous as the way Broadmoor inmates are being pampered!

Nevertheless, there was one surprising factor in the inmate study regarding Caribbean figures – “Haiti has the distinction of having by far the lowest prison population rate in the region — a mere 43 inmates for every 100,000 people.”

Also amazing, was the fact there are Caricom members who fall outside of the top 50, and these are – Guyana, Jamaica, Martinique, the Dominican Republic and Haiti. Perhaps it is not so profound, as these territories have the potential to reach a final solution before accomplishing a penal solution!