Barbados had a Contender? Yup, he was one Hell of a Pugilist! 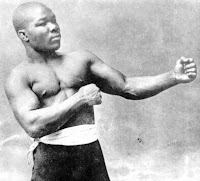 I was sailing through Google today when this one hit me (pun intended) – “…in 1904 Langford got his chance at welterweight champion Joe Walcott, the Barbados Demon. This was Langford‘s first and only title shot and with analysis of the reports it is clear he was done an injustice. Langford proved too illusive for his opponent and when drawn into a dogfight he also had initiative.

?The fight was ruled a draw but as reported by the ?National Police Gazette??there were plenty present who thought Langford won?. Langford dominated the first seven rounds and remained untouchable with his calculated style and by the latter stages of the bout Walcott’s desperation left flaws in his roughhouse approach, which Langford willingly exposed.?

Obviously, I could not have been there, but it did make me wonder about this Bajan boxer… When you look at him, there is no mistaking his face nor name, it just fits in with what is essentially Barbadian! Then I learned Walcott invented a catchphrase Jimmy Cliff would slightly alter almost a century later “It was Joe Walcott, the Barbados Demon, welterweight champion of the world from 1901-1904, who actually coined the phrase “the bigger they are the harder they fall.” Bob Fitzsimmons certainly popularized the saying before he faced Jim Jeffries, but it was Walcott who first said it. The phrase belonged to Walcott, who despite his short stature was extremely successful against much larger and heavier opponents. He had fantastic stamina and durability as well as a proven punch. A natural welterweight, he was one of the greatest “pound for pound” fighters in boxing history and fought men weighing from lightweight to heavyweight during his career.“

What exactly constitutes a diminutive stature? Most records indicate at least 5’1″ and little much past that, however, it was his physique and his reach that created the Goliath in this David!

Records from the early 20th century are a bit iffy, some say the Barbados Demon was born 1873, while others indicate 1872 – there are claims he was born of Bajan parents in Demerara in then British Guiana? Others say it was here in Bim, but not what parish.

Unfortunately, he had the tendency like many fighters or athletes and quite a few actors to spend his twilight in less than adequate comfort – “From his retirement in 1911 until 1935, Walcott worked many different jobs. His boxing fortune had long since depleted. Destitute he eventually surfaced in New York City. It was there that Mayor Jimmy Walker learned of Joe’s Plight. Walker was able to get Joe a job at Madison Square Garden.”

In the end, the opponent that bested him was not human – “Bill Cereghin, a devoted boxing fan from Defiance, Ohio… went on a mission to find the once great champion. In 1955, Bill’s efforts led him to Massillon, Ohio some twenty years after Joe had last been seen. Massillon is a town famous for the exploits of their high school football team once coached by Paul Brown. In Massillon, Bill got the break he was hoping for. Someone remembered a person fitting Walcott’s description working in a small town near Massillon called Dalton. When Bill arrived in Dalton, there was no sign or clue of Walcott. He searched the town cemetery with no luck. Finally a gravedigger led Bill to a Potter’s Field on a small hill and said he remembered burring a person of Walcott’s description who claimed he was once a great fighter. Bill then met with the undertaker who verified the gravediggers claim. Joe had been walking on night and was hit by a car dying at the scene. Now satisfied that his search was over, Bill decided to try and dignify the unmarked grave. Bill found a slab of cement and with a black crayon wrote “Joe Walcott; died October 4, 1935,” the date the undertaker had put on Walcott’s John Doe death certificate.”