Thomas Wolfe has an overquoted aphorism that “You can’t go home again” – George Codrington is gonna try and prove that wrong during the Cricket World Cup next month, not only returning to his where “…he navel-string bury” as we like to say – but on Canada‘s team as part of the ICC Games at Kensington next month and April. This is what Metronews had to say – 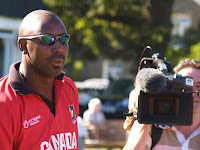 “The presence of Canadian all-rounder George Codrington at the 16-country tournament in the Caribbean means one less parking enforcement officer in Canada’s biggest city.

” But for the 40-year-old Barbados native, the World Cup means a trip to the pinnacle of his sport – and some familiar turf… As a young man, he played professional club cricket in Australia and England and spent two years as Barbados under-19 captain. He continued playing after coming to Canada and has toured with the national team.

“He met his wife at a friend’s barbecue during a week long stopover in Canada en route to Bermuda with the Barbados under-21 team. They eventually settled in Canada in 1994. 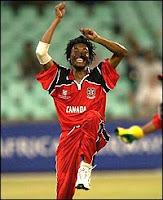 The 40-year-old Bajan Codrington is considered long in the tooth as it relates to current standards of playing cricket, but there’s another team member who’s older than him –

“Anderson Cummins who has “probably a couple of months” on him. The two played together while in Barbados.”