Toni Thorne is on her way to becoming a successful “fashionista“, but she also has secret desires of being a cheerleader as a result of childhood games…

“She recalls moments as a child when her parents would allow her to dress up in whatever she concocted and wear out to the Supermarket or to relatives.“

The Antigua Sun article said she was tired of wearing the same clothes as everyone else in St Michael – ?My friends and I always wanted to look different and did not want to be seen in the same clothing that others found easily accessible in Bridgetown.? 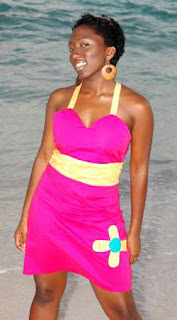 The event, “Show Me Your Body“, is sponsored by bMobile and she’s one of three Bajan designers displaying their wares, she also – “…describes the line as clothing for young women who know who they are and are not afraid to say what they want and most importantly be who they want.

?I would say my clothing is funky, yet sophisticated. I believe that skimp does not define beauty. There is no need to be skimpy to look sexy. As fun and fresh as my clothes appear, less is often more at times.

At UWI, she’s completing courses in Accounting & Economics as back-up’s to her desired career!