18/01/2007, FOLLOW-UP: Film Director claims he still has two legs to stand on – Michael Winner is now at Harley Street after a bad anti-biotic reaction at Bayview here…

“I have been interested in recent newspaper reports suggesting I had lost, or was about to lose, one leg, two legs, an arm, a head – some people suggesting this went some time ago! – or even a fingernail.

“I am happy to tell you that, when I last looked, all of these items appeared solidly where they have been for many years.”

According to the B’dos Free Press – “[Michael] Winner was not in the QEH – he was in Bayview. Our bad! However, the point of the article remains the same? 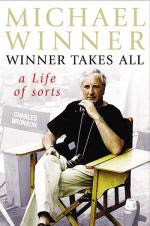 How unfortunate that an international personage like Mr. Winner is broadcasting in the world media what we all know to be true.”

Now, everyone knows that we are thought to be amputee capital of the WORLD – well, unfortunately, it may hit the film director, who is claiming to die rather than remove his leg! That may seem extreme, but there are some guys who could understand if this was his d***, but for me not your leg to hold out for, there are great prostheses now…