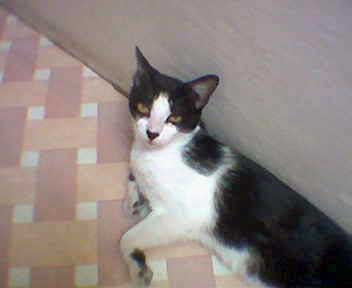 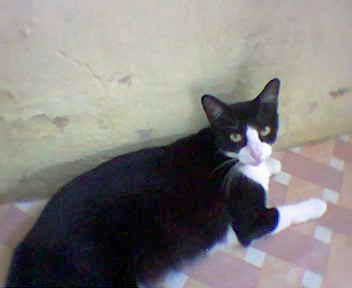 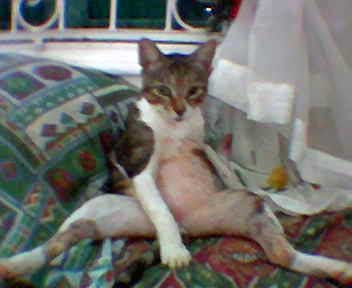 He came in on a damp June night, snarling as he was wet, dirty, skinny and with a really bad cold – then he never left…

I never forgot that evening – I was eating spaghetti after watching the only good movie Jennifer Lopez ever made, “Enough.”

Being black and white like our other cat Mimmo, we were glad he had a black nose to tell them apart – at first he was called Sylvester as in Tweety, but after seeing a Boston Terrier with similar Markings in Mark Tatulli’s “Heart Of The City” I used the name given for the canine foundling; Tudaze (too-dazz-ee) or Tudie for short. That stuck…

There was more, he bore a striking resemblance in shape of ears and slant of eyes to Simon (recently neutered after having eye surgery when some bastard tried to hit him with a rock) and their skulls had similar width… Thus, “Son Of Simon” which almost sounds like a serial killer but not really – fitting for cats and their “love” of birds, eh?

Then “Sylvester/Tudaze/Tudie” became Sylvester Stallone and his full name was finally born! SYLVESTER TUDAZE STALLONE – SON OF SIMON, a very powerful name… But now I have not seen since December 16th, and it hit me hard last night, it’s the second time now a cat has disappeared on me!

The first time was with Ginja the Ninja (now she was a huntress, one of my strongest memories is her eating half of a dead mouse wile pregnant and I still believe that is why her son Patch is so big, full of protein from a foetus) in August last year, and this added to the loss and is actually one of the main reasons I created this blog!

I still hope I find Ginja (who used to run like a puppy to me if I call her, and love to be rubbed until she drooled down her chin and throat) and I still have a vague hope for Tudie – but there’s another part of me which is gently yet firmly trying to warn me not to hold my breath on it. 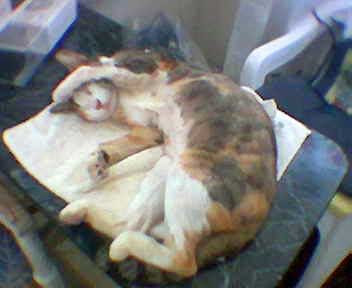 Tudie created his own memories… His “mother” was a dog – Lady – who thought Patch was her husband, they grew up together and so she thought Tudie was her child; the Son Of Simon never mewed – just let out a squawk now and then; hated being rubbed at first, then grew accustomed… But my favorite? 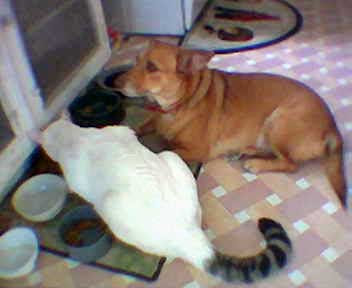 I had to give him a flea shot on the back of his neck, to distract him, my Mum fed him and I snuck up when I put the syringe by the stop (back of his skull) and squirted the solution? He WHIRLED around, eyes blazing with righteous demonic indignation and hissed like all of the leaky fire hydrants and near-empty kettles of the world!

I laughed for about two days just remembering his fury and the spin executed like a Jet Li move – gad, I so miss him!