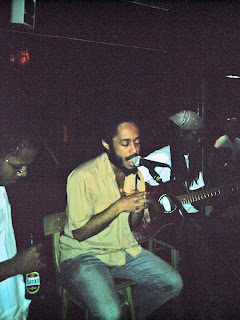 Mojo is now the happening place for those of you who want something different from the Jamaican dub and US rap which has obliterated the Trini pan and Bajan calypsoes. This may be alternative, but it is homegrown and not imported stuff!

Recently the Worthing establishment was graced by an impromptu session from Fitzroy Jeffers who jammed with Garvey of Garlex (every Friday at Opa in Hastings, another cool spot) and Nicholas Granger. They were nearly messed up when Fitzy made a bold move in asking the crowd to throw in a word for a song and one twisted spark hollered “NUNCHAKUS” (I wonder who that was) but the Frog Who Saved The Universe kept leaping and made the word as part of an anti-groupie song to the amusement of the crowd.

“Resurrection Blues” is on it.

There’s a song called “She (Her – part II)”, and as much as I hate the fact that I had to revisit it, it was entirely necessary.

I bought another cutlass (machete for you americans). The handle is red. The Sword of the Resurrection is now framed on my wall.

This apocalypse is a lot more exciting than I thought it would be. The frogs are gathering up for the final battle.

Elvis was right, peanut butter does taste good with banana.

Girls who drink Guinness are still the sexiest beasts on the planet.

Buffalo Brown is still a badass.

I’m going home and although I’m coming back, I’m not really coming back. 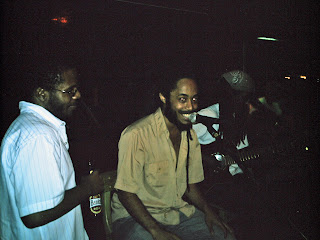 Everything was supposed to change a few days from now, but fuck it, they just did. That’s been happening a lot now in the last few… weeks? These changes, rolling, roiling, constant, unceasing. The big one however, the Big Wave just officially hit as of 9:49 p.m., November 13th 2006 though. Wild, like a rollercoaster through Vallhalla, Hades too. Buy the ticket take the ride, right? Gotta love it…

Consider this your warning, part II has begun.

You can clap now.”

Did you know the Cricket World Cup is also a part of the Mojo scene? That’s probably because you never heard of Dick Rash & The Jockstraps…

But Chief Operating Officer & Venue Development Director Don Lockerbie seems to have an inside track on this group, he should do, since he was the lead vocalist in his college days. 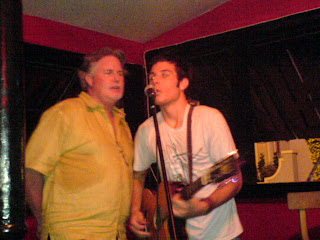 But he was not the headliner that night in question… He was a guest of his own son Trey, whose on tour now with Collective Soul, Josh Kelly and the Gin Blossoms – apart from opening for Shawn “Lullaby” Mullins.

Be it an original tune with powerful lyrics like, “…in my arms/ yet out of reach…” or dipping in the 60’s archives for Bob Dylan’s “All Along The Watchtower” or easing fwd slightly to Oasis’ “Wonderwall” – Trey is equally at home with his phenomenal breath control.

He reminds me of a young Woody Guthrie, and when he is jamming with his Dad you can tell they are equally proud of each other and there doesn’t appear to be the usual Rustem/Sorab clash that occurs when fathers and sons are equally significant or powerful.

Trey has appeared on CVM‘s morning show over in Jamaica and he uses a Yamaha Compass for most venues. 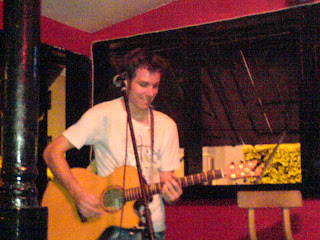 So it appears that Garfield is wrong, Mondays aren’t so dreadful after all – there’s always Mojo’s!