I say, pass the Banks, what?

Now people could get vex at the story from the Daily Telegraph, a known Conservative/Tory mouthpiece how the family of Tony Blair jumps here when Question Time in the House Of Commons gets a bit rough – but I think we should use this as proof that Barbados is the liming capital of the Caribbean!

After nearly a decade in power, Tony Blair has got the art of securing free or cut-price holidays in exclusive destinations down to a fine art.

Within a couple of months of coming to power, his family enjoyed a two-week break at the ?3 million Tuscan villa owned by Geoffrey Robinson, the millionaire Labour MP.

The Blairs then decamped to a 12th century chateau owned by Sir David Keene, a High Court judge, in St Martin d’Oydes in southern France.

A year later, they were back in Tuscany. Their host this time was Prince Girolamo Strozzi. Since then, his 50-room villa has been a regular destination. The regional government of Tuscany put the Blairs up at an official villa in 1999, and the Egyptians provided a luxury villa when the family travelled to Sharm el Sheikh on the Red Sea in 2001.

In 2002, Alain-Dominique-Perrin, a French tobacco industry millionaire, invited the Blairs to his 15th century chateau in southern France. 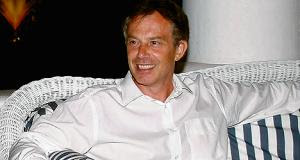 Since 2003, they have enjoyed a series of holidays with Sir Cliff Richard in Barbados. In 2004, they also paid a visit to Silvio Berlusconi’s villa in Sardinia.

Then the Daily Mail also took a lash in Blair’s pooch, and the reader comments were 26 in all – but much as I may personally dislike Blair despite him being a Liberal… Tell me, how can he take a vacation without it involving taxpayers? Is his salary not culled from the voters own wage deductions for this, that and the next? Mon, shaddup and pass another beer, do! We just have the best medicine to de-stress and wunna jealous! 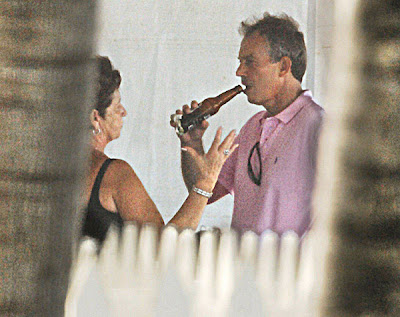