Down by the River Jordan? 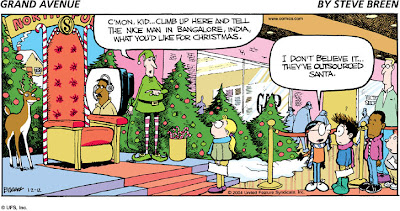 Got this in my e-mail, and have no idea if true or not? It allegedly was sent to a Rhandi Forde from a Joy Forde? So it is edited accordingly; –

“…I know that Christmas is a busy time and the supermarkets are busiest.

However I visited [a Popular West Coast] Supermarket on Saturday 23rd December 2006 in the afternoon. It was chaos. I placed tied my bag of vegetables that I had purchased outside on shelves provided to place your bags.Since you are not allowed to take extra baggage inside.

There was no one there to give you a number. I [waited] close to an hour and a half … waiting in the check out line. I spent $95.00, my daughter met me there as I was leaving, I went for my other bag to find it missing, I searched, the bag was gone.

A supervisor (female) came down the stairs the same time and I told her my bag was missing she mumbled under her breath what I want her to do and walked on. I saw a guard and I called him and explained myself, He spoke to me very politely,and he apologised, more than the supervisor, who by the way was standing on the platform in the front of the store backing me. I said i will not be shopping {at the [Popular West Coast S’Mkt]} again.

I don’t blame the [Popular West Coast S’Mkt] staff for the theft, but the rude manner and unappreciated way that I was treated. It was $25.00 in vegetables all she had to do was treat me like a valid customer as I have been shopping there for nearly ten years.

We are hosting some of the World Cricket’s Games – a simple apology from a supervisor to a local was not seen fit. {The [Popular West Coast S’Mkt] } have lost a valid customer!”