Documenting Mental Slavery to Mock It 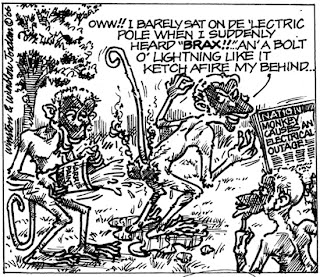 Mockumentary is one of the new “portmanteau” or combo-words of the 21st Century to indicate a film is a fake documentary covering a given set of circumstances or an event or what led to a situation ? for the most part, they are humourous.

Sometimes they are serious like the Canadian movie which was released in early October that looks at life after the assassination of George W. Bush before his second term was completed; this mockumentary is very controversial as most American cinemas refuse to run it, but Canadian and British counterparts seem more than eager to run the show.

On the humourous side, there are few that deal with the Caribbean or Barbados, until now? Miguel Drayton, who is based in Los Angeles, did a picture on the life of a green monkey bounty hunter called Oswald Moore (Ossie Moore? Laughs) whose main adversary is a repatriated green monkey from the USA called Shango who is considered a terrorist in Barbados!

“From Barbados With Love” stars many interesting Barbadian personalities ? such as Victor Clifford who plays Oswald, an embattled predator in a world where old methods of tracking his prey are rapidly changing and reflecting the new era; Dale Forde, an ex-anchor from CBC TV-8 as a morning-show host; Julius Gittens, one of the leading presenters at the Caribbean Media Corporation also playing a morning veejay or video jockey; Thom Cross plays a cantankerous organiser from Graeme Hall and then there’s another former anchor from TV-8 whose style of doing news for the mockumentary is totally iconoclastic?

He relays it in pure Bajan dialect; something if he did in actuality would have been frowned upon by the powers that be at CBC to say the least! 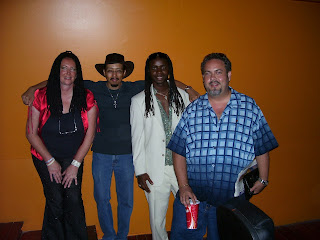 Yet this was exactly the sort of ice-breaking that Miguel Drayton was looking for; he not only wants to see more Bajan movies of all types, but to ensure our colonial apron strings are not just cut, but burned at the stake and the ashes scattered to the four winds so this island-sate can truly advance full steam ahead into the next millennium as an authority in its own right.

Just the other day at Olympus VIP, there was the launch of the music video from the movie as performed by Magnet Man.

It is ironic how beautiful the song is in being a successful vehicle to promote this destination as a place to relax. This is in direct contravention yet juxtapositioning to the unspoken commentary of the movie on various dogmas still holding forth in what is supposed to be one of the best-developed countries of the Caribbean?

How can we declare desire to be a republic when in a tropical climate we still hold to jacket, shirt and tie for doing business, or donning wig and robes for our judiciary; why do we get on bad during a festival celebrating the end of a dwindling sugar harvest and yet frown at the frolicking of the same event? Are we breaking away or not?

There are still pockets of conservative prudery for the public eye and private sexual or non-sexual shenanigans ? this is nothing for the supposed racial melting pot that only bubbles and simmers oh so sweetly as foreign visitors touch our shoreline?

“From Barbados With Love” is due to open in local cinema by early next year, which is good as Barbados plays host to another Caribbean style movie called, “Hit For Six!”

This involves cricket and plays on the impending World Cup with many local cricketing icons like Joel “Big Bird” Garner and is the brainchild of one of the Caribbean-transplant actors who was an integral part of the BBC’s “Love Thy Neighbour” television series in the 70’s.