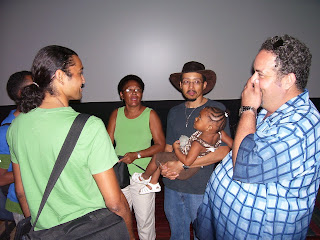 After watching ?After The Sunset? from late 2004 with Pierce Brosnan, Salma Hayek and Rupee?s music the other night for the first time since its original release, then I was flipping through the channels it suddenly occurred to me how many movies over the decades have been inspired or set in the Caribbean?

(For those of you yet to see it? It?s a kind of sequel to the re-make Brosnan did of 2002?s ?The Thomas Crown Affair? with Rene Russo, of which part was done in Martinique, but this one? Pierce plays a slick gem-thief by name of Max Burdett who retires with his girlfriend Lola Cirillo as interpreted by Selma Hayek, they retreat to a supposed Caribbean paradise after one last amazing heist. Woody Harrelson plays Stanley Lloyd, the FBI agent assigned to protect the purloined stone, and he chases Max expecting him to try to take another jewel exhibited in a passenger ship and thus commit the final mistake to give the agent the arrest he needs for redemption? If I tell anymore then I?m stealing the plot, not the jewels ? wink!)

Now Jamaica was the first to grab for the silver screen in many respects, there was ?Dr. No? back in ?62 ? in many ways, this was not only the first but last James Bond movie that just happened to follow the book of the same name from Ian Fleming. Now, while some may feel ?Dr. No? is not a spectacular Bond movie by action or excitement, it does have one of the better-plotted scripts.

But this is mainly a music review and it?s that aspect we?re looking at? Unfortunately, according to IMDb.com the music from this Caribbean spyfest was not listed!

Nevertheless, Jamaica in its own right has done many pictures on its own bat ? ?The Lunatic? from the late 80?s where JC Lodge and Burning Flames from Antigua; who can forget ?Dancehall Queen,? ?Third World Cop? or ?Shottas,? with the latter featuring Beenie Man; there?s also ?Smile Orange? a humorous commentary on tourism from the late 70?s as well as ?Klash? and ?Countryman??

The musicals that came from Jamaica were ?Rockers? their version of Robin Hood with Robbie Shakespeare, Gregory Isaacs and Jacob ?Killer? Miller; with Jimmy Cliff, they have their own version of Sinatra as a singer/actor in comedic and dramatic roles ? ?Bongo Man? and ?The Harder They Come? are his serious milestones there, but then he also did a comedy in 1986 with Robin Williams, which now sets us back where we?re searching for ? Hollywood flicks with the taste and feel of the Caribbean?

Club Paradise is a serenely ironic view of the culture war that?s destroyed so much of the Caribbean way, and, for that reason, it suffered unfairly in many reviews.

The pivotal scene is a military confrontation on the island of St. Nicholas, between the ganja-smoking employees of a small resort and the island troops personally led by the prime minister played by Adolph Caesar, who is in cahoots with a sheik to develop St. Nicholas. The governor Peter O’Toole in dress uniform rides up and decides the issue on the spot.

The satire is totally fair coverage, between the well-off idiots who patronize the resort via dumb luck, the connivers who plot to take it from them as well as the staff who have their own idea of work ethics as practised here in the Caribbean…

The music itself is a mix of reggae from Jimmy Cliff and 80?s pop from Elvis Costello, with only a smidgen of an appearance in ?Club Paradise? from ?Miss Lou? or Louise Bennett.

Then there was both ?Cocktail? and ?The Firm? from Tom Cruise, the first in Jamaica and the second in the Cayman Islands (never was impressed by Tom Cruise, gasp!), but it was in ?Cocktail? that had ?Kokomo? from the Beach Boys that led to the controversial decision in the region to have it remade to reflect Caribbean destinations, why not let The Tradewinds or Merry Men tackle it? This was the question on most folks? lips at the time?

Also set here but with not much music in it was the first two parts of Disney?s ongoing ?Pirates Of The Caribbean,? with Johnny Depp ? there are still many who felt he should?ve gotten the Oscar for his performance ? who did that fabulous scene with Kiera Knightley?

KK: You spent four days and three nights doing nothing but drinking rum?

JD (arms outspread and grinning lopsidedly): Welcome to the Caribbean!

Well, anyhow, you had to be there? Now, there were a few films in the late 50?s that were set out here ? one was ?Fire Down Below? from 1957 with then-famous tough-guy actor Robert Mitchum who was so enchanted by Trinidad that he actually tried his hand at calypso in a record (a vinyl version of a cd played with a diamond needle, kids?), but obviously it never got past the novelty stage! Jack Lemmon in a rare serious role in his salad days, came up with the harmonica score for the movie as well?

The movie itself as about two guys who owned a tramp boat, they sail around the Caribbean doing odd jobs and drinking a lot. They agree to ferry the beautiful but passport-less Irena to another island. They both fall for her, leading to betrayal and a break-up of their partnership. [Mitchum] takes a job on a cargo ship. After a collision he finds himself trapped below deck with time running out (the ship is aflame), and only [Jack Lemmon], whom he hates and has sworn to kill, left to save him.

Meanwhile, there have been at least two pics that were made mostly here in Barbados ? there was a classic from the same year as ?Fire Down Below,? it used the Farley Hill National Park before fire destroyed it and we hosted Harry Belafonte and Joan Fontaine? I wasn?t even born yet, but your grandparents may recall when ?Island In The Sun? was filmed in our very own Gem Of The Caribbean Sea fifty years ago!

Set on an imaginary Carribean island during British colonial rule. It focuses on the life of a young charismatic and handsome black man (Belafonte) with political aspirations. He finds himself acting with mixed signals when going back home and he forms a romantic liaison with a white woman (Fontaine), which tends to conflict with his political views.

An interracial screen kiss caused quite a commotion in the U.S. when the film was released. The plot is further strengthened by a look at the lives of a white ex-pat family also living on the island. The family has to deal with problems of infidelity, racism and murder.

Yet this was a vehicle for Belafonte?s pre-digested island rythms with his version of the title-track of the film that was made famous by the Merry Men ? parts of the flick were done in Grenada, but it was mostly made here in Barbados, especially at Farley Hill.

Seventeen years later, there was a chance for Banks Beer to get the international silver-screen highlight in the Julie Andrews/Omar Sharif movie ?The Tamarind Seed? which also featured the late Alfred Pragnell as a hotel manager at what was then the Seaview Hotel and now the Savannah under the Gems of Barbados.

That spy-flick also had minimal music credits to its list and thus we jump straight to 1989? Originally entitled “Finding Maubee“, the title of the novel by AHZ Carr on which it was based, it became known as ?The Mighty Quinn? with Denzel Washington.

This is a very good movie that does not follow the “rules” of the current black American film genre. It doesn’t blame white society and won’t leave you beaten down.

This movie captures the best part of Jamaican culture ? the fun part. Denzel Washington stars as Xavier Quinn; a Jamaican thrust into a role of responsibility as chief of police. The locals like Quinn personally, but they see him as a stuffy, uptight puppet of the ruling elite, so they constantly take pot shots at him ? great scenes in the movie. It really focuses on the duality of Jamaican culture.

Robert Townsend threatens to steal the movie as the rascal Maubee, Quinn’s childhood friend who never grows up. Beloved by all Jamaicans he represents what Quinn can’t be ? the irresponsible one in all of us.

Rita Marley makes a cameo spot in the picture, while her late hubby ? the one and only Bob ? has his ?I?m Hurting Inside? appearing along with another Bob? Mr. Dylan?s song ??Quinn? for the film in question.

So the Caribbean has had at least five decades of being used as part of a plotline for Hollywood flicks except where Jamaica and Trinidad have had their own moments of doing some movies, now it?s Barbados? turn and we look forward not only to the annual film festival here, but which local artistes will be included and where it?ll be distributed overseas ? which leads to royalties for all involved!